Beholder
I write, draw, and program the Beholder projects.

Current Beholder project:
A story about a cat.
Release date uncertain due to work commitments (mine, not the cat’s).
CompSci
I’m a Computer Scientist by training — currently I work full-time in the Comp Sci department at Royal Holloway, where I studied in the 1980s (I taught there in the 1990s, too). You can see some remnants of my earlier time at RHUL (as it is now known) in my scrapbook and vintage illustrations.
Exploding Pen
I keep Exploding Pen ticking over, which publishes the Beholder book projects Fudebakudo and The Knot-Shop Man.
mySociety (2010–2017)
For seven years I worked full-time as part of the international team at mySociety, a UK-based charity and sort-of-NGO that makes websites and digital tools that empower citizens all round the world.

Aikido
Not brawling for no prizes. In skirts. Weird.

Sotenjuku dojo in Egham and Staines
Renbukan dojo, Bangkok (Phra Khanong)
Over the years I’ve trained at aikido clubs in many different countries, and a variety of different dojo in Japan (including, of course, the hombu dojo in Tokyo).

Thailand
I’ve probably spent over seven years, on and off, in Thailand. For two and a half of those years I was a volunteer at a girls’ school, where I taught art to 6-year-olds, and English to 11-year-olds.
Bike
I’m an ex-biker, and I miss it. Many, many years ago I had a trusty CX500. My last bike was this Honda NT650DV. If you don’t know about bikes, you’ll think: ooh, big bike. If you know the difference between an NT and a CBR, you’ll think: Dullville.
Boat
Another thing now in my past was being crew on a Drascombe. Two masts, tan sails (you care? OK: a gunter-rigged yawl with a loose-footed main) and the whole thing the size of a very large wardrobe.

For not entirely practical reasons, I used to be a member of the IGKT:

I‘ve been a reader of the following things for a long time:

Three worthy causes to which I belong:

There are a number of people whom I greatly admire, and luckily for me several of them are my friends, colleagues and teachers.

Finally, in a list of no particular order, here are some people whose lives or work are, to my mind, especially deserving of a standing ovation: 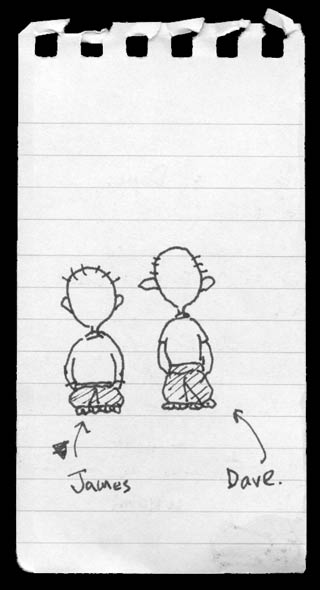 Head Twins, pen and ink portrait by Masayo, c.2003. This detailed and carefully observed piece shows James and Dave (right) at the start of an aikido class. Dave is taller than James. Note thoughtful placement of hair.